Home » Itchy Vagina After Sex | Is It Normal?

At the time, it was pleasant, you both had a good time (at least, we hope so for you). But then, it was a disaster. It started to itch down there, you tried to resist a bit but you finally gave in and scratched, scratched, and scratched – which felt good at the time- but you soon regretted it when it started to burn.

At first, you thought it was normal. But it’s been several days now and you’re really starting to worry. You shouldn’t be. It happens, and more often than you think. There can be many reasons for this, and here are some things to look at. But no matter what, there’s nothing like a doctor to cure it all.

A brief description of what happens

Itching of the vulva can have several causes: dermatological, infectious (bacteria, virus), irritating, or inflammatory. They can occur after sexual intercourse and are more frequent during pregnancy.

The vulva refers to the external genitalia of the woman, which protects the entrance to the vagina. It is located at the bottom of the abdomen, between the pubis and the anus. It is ovoid and has a median cleft (called the vulvar slit) that divides it into two labia majora.

These cover the labia minora, which meet at the front and top to form the hood of the clitoris (the female erectile organ). The vulva is topped by a triangular-shaped hairline.

From a physiological point of view, the vulva is involved in three functions:

Itching of the vulva, called vulvar pruritus, can be simply due to the use of toiletries not adapted to the delicacy of this area of the woman’s body or various diseases or conditions.

The causes of itching of the vulva

Itching of the vulva is a symptom that appears in many diseases or conditions:

Itching is not the only characteristic symptom of these diseases or conditions. Burning, local pain, redness, or vaginal discharge may accompany them.

Itching of the vulva after sexual intercourse

If vulvar itching occurs after sex, it may be a sign of a sexually transmitted infection, such as vaginal thrush, vulvar herpes, trichomoniasis, or crabs.

During pregnancy, fungal infections (caused by the fungus Candida Albicans) are more common and are accompanied by itching of the vulva.

Note that itching of the vulva in postmenopausal women is often due to vulvar kraurosis, a dermatological disease.

Itching of the vulva leads to scratching of the area, which may cause lesions, bring germs and lead to local infection.

It is also important to note that in many cases, itching is one of the first symptoms of a disease or condition. Ignoring it can lead to a worsening of the disease.

Treatment and prevention from vaginal itching

The gynecologist will take a myco bacteriological sample to identify the cause of the itching and propose an appropriate treatment.

Among the treatments that can be proposed, let us quote :

To try to avoid the occurrence of conditions causing itching, it is important to :

Finally, if your pubic area is itchy all day long for no apparent reason, you may have just forgotten that you had a full bikini wax 3 days ago.

How To Style Leggings | Can You Still Wear Leggings in 2021 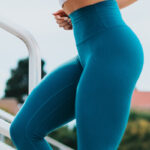